New Horizon is a game about humanity’s spread into our solar system and the horrors we discover as we go there.
It is an exciting mix of Blade Runner universe, Aliens movies, Lovecraftian horror and hard science-fiction.
The scope of New Horizon is contained to a fantastical setting that is still familiar to us – our solar system, from Mercury out to the frontier of the Kuiper Belt.
Earth is still the center of the universe, home to all mankind, but millions of people dwell in colonies and space stations spread throughout the solar system and beyond.
Spaceships travel between the worlds, using technology that propels them from world to world in a matter of weeks or months, instead of years.
Despite the fact that the nations of the solar system are united in a way never before thought possible, the vast distances that separate the colonies of humanity create a sense of isolation.
The journeys through the black are long and lonely.
There are many who find this isolation difficult to deal with, especially given the things that now roam in the dark.
New Horizon is a couple hundred years into the future. In terms of its influences, the setting is approximately equivalent to the technology presented in such movies as Total Recall, After Earth, Outland, Starship Trooper, Avatar, Elysium, Predator, Doom, Pandorum, Event Horizon or The Expanse TV series.

The Basic Roleplaying SRD is based on Basic Roleplaying, the simple, fast, and elegant skill-based percentile system that is the core of most Chaosium roleplaying games, including Call of Cthulhu, RuneQuest, SuperWorld, and others.

For further details and to download the SRD document, see our Basic Roleplaying SRD information page.


A Sword & Sorcery roleplaying game set in a Fantasy Bronze Age inspired by the legends and cultures of the Ancient Near East.

The Zaharets, the land between the Vori Wastes and the Plains of Aeco, is well-known as the Land of Risings. Dominated by the rising city-states of Ameena Noani and Sentem, facing each other along the great War Road, the Zaharets has always been home to powerful civilizations. Beastmen ruins dot the landscape, a constant reminder of the Kingdom of Sin and the fragility of the Law of Men. Even older are the great ruins of the Hulathi, the legendary sea peoples, and the Hannic mansions sealed beneath the mountains, awaiting those who would seek out the Lost Folk. Scars abound from the wars between ruined Keta in the north and Gerwa in the south. And, far to the east, the legends of Muadah still beckon occultists and Jackals who seek to plunder its corrupted ruins.

Inspired by the myths, cultures, and history of the Ancient Near East, and by such ancient texts as the Iliad, the Epic of Gilgamesh, and the Old Testament, Jackals is a Sword & Sorcery roleplaying game set in a Fantasy Bronze Age. With mechanics based on the popular OpenQuest system, the game places players in the role of Jackals - adventurers, explorers, sellswords, and scavengers - and sends them out into the peril-filled land of the Zaharets to make their fortune. or perhaps fulfill a greater destiny. 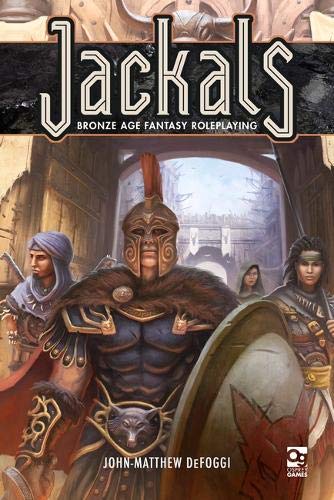 Avec une campagne prévue pour 2021:
Jackals - the Fall of the Children of Bronze: A Grand Campaign for Jackals


The Fall of the Children of Bronze is a grand campaign for Jackals, and includes 30 adventures spanning 15 years. Players will explore the ancient myths and legends of the War Road, from the bustling streets of Ameena Noani in the north and Sentem in the south, to abandoned temples in the wastes, and mansions deep within the earth. They will encounter beings and powers from the past  ancient but far from dormant  and come face to face with the hidden hand that would the Law of Men torn down and chaos brought to the Zaharets.


. Simplified BRP for kids with investigative fantasy (not horror but children's fantasy)
. Something based on Jules Verne's Mysterious Island
. Sci fi generation ship (as long as it is not based directly off Niven's Known Space stories or Jim Ward's Metamorphosis Alpha without his permission, great!)
. And an adaptation of an existing French RPGs to BRP by their publisher.