Eighteen months after announcing a science fiction RPG setting built around the Basic Roleplaying system, Ann Arbor-based publisher Chaosium Inc. and award-winning designer Chris Spivey have announced that they have halted development on the project. All setting material created to date will be released to Spivey, who had been serving as creative lead. Spivey will continue developing the material through his studio, Darker Hue. The decisions to stop work at Chaosium on the Afro-Judeo setting, currently titled Kadimah, and for Spivey to take control of the material were mutual.

“I’ve been working on this project for quite some time and was looking forward to partnering with Chaosium to bring it to life. After months of positive discussion together, it became clear to both of us that the best way forward was to take the journey separately,” Spivey said. “I look forward to publishing this project in the future and I am thrilled Chaosium will continue to lend their support. The science fiction genre is perhaps my all-time favorite, and incorporating African and Jewish elements into the setting and story will reflect the richness of my and my family’s heritage.”

Chaosium executive editor James Lowder added, “The recent growth in popularity of our core game lines, the acquisitions (or reacquisitions) of 7th Sea and King Arthur Pendragon, and the progress of new ventures such as the upcoming Rivers of London RPG have devoured Chaosium’s development and production bandwidth. It became clear at the start of 2020 that we couldn’t schedule the BRP science fiction project as quickly as we had originally hoped.

Moreover, as Chaosium worked with Chris Spivey, we recognized that the material he was creating was intensely personal. Out of respect for Spivey as a creator, Chaosium revised the original work-for-hire contract and released the material to him. We know that he will do fantastic things, and we look forward to seeing the project’s final form.”

Chaosium and Spivey continue to work together on other existing collaborations. Spivey is the creator and writer of a currently untitled modern-day superhero campaign book for the Pulp Cthulhu line, which is in the early stages of development. The second edition of Spivey’s award-winning Harlem Unbound is in final production and will see release by Chaosium early in 2020.

“Spivey is a talented designer,” Lowder noted. “We hope to see his name alongside the Chaosium dragon for years to come.” 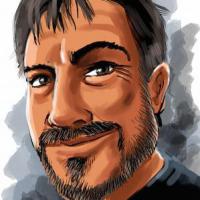