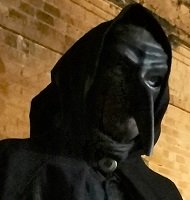 Each rune will cost an additional $10 Once the campaign is complete, we will send you an email requesting your choice of runes.


Jason Durall is the line editor for RuneQuest and he handles the bulk of the regular publications so he's got the Smoking Ruin at the printer and it should be showing up at stores as quickly as it comes out of Lithuania.

The next book that goes in from regular production is the Pegasus Plateau which is another group of scenarios.
We're really trying to load up on scenarios for the new RuneQuest.

Then we've got the RuneQuest Starter Set, very similar to the Call of Cthulhu box set that basically gives you everything you need to have to start playing RuneQuest in a box.
So it's got a solo adventure, it's got pre gens, it's got a Johnstown city book and a group of adventures that take place in the Johnstown area.

And then my big project.
Jason's got a number of other projects that he's working on: he's got a Grazelander campaign book, there is a Arms and Equipments book and so forth.
Then there's the books that I'm working on which is getting the art finished on the Cults book and we've got some very very exciting news on the artists, late artists that we'll be finishing that book up.
We just have to wait for him to finish up the Malleus Monster, awesome, but we're looking at working with Loïc Muzy. [..]
We're looking at getting the Cults book out by the end of the year.

Then I have the RuneQuest Campaign book which wind up with a better title than that but this is basically Boy King for RuneQuest so it's the hero wars' campaign.

And i've got i'm working with Chris Klug on finalizing the the narrative mechanics for heroquesting in RuneQuest.
We've got the mechanics of your rewards and what sort of benefits you get from it but what we've been really working on is on narrative, how to have GM's and players that really don't know anything about Glorantha and mythology beyond what's in the core book or maybe the Cults book, maybe ...
Oh the challenge for Glorantha is there's so much stuff in there and no one wants to read a thousand pages - well maybe some people do but but a new GM doesn't so what we've realized is the problem with heroquesting ... we had the mechanical side of this finished a long time ago and you've [you = Sandy] solved it the mechanical side of it you solved it before, Greg solved it before, lots of people had solved it, you know what sort of cool benefits, what sort of cool things do I get out of a heroquest...
yeah the real trick was is the how do we give tools to a GM to be able to create these mythological feeling, it adventures yeah that follow more of a story tale myth logic than regular gaming logic, how do we give them the tools to do that and how do we let them create adventures without having to know a lot about Gloranthian mythology and so I've been working with Chris to finish that up and we think we will have our expectations.
We will have the final text and mechanics ready for Gen Con and then it goes in art so those are my special projects right now and I think they're all pretty cool ones.
I mean how long have most of these been promised Sandy? Well I mean we were promising them back in 1981! 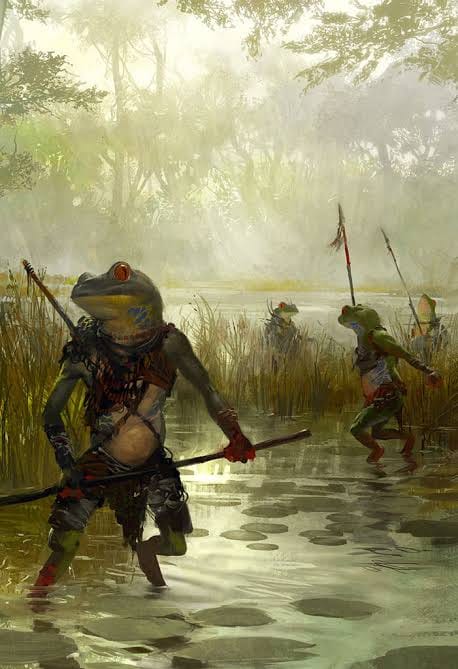 
7,000 live in the Bottomland Marsh in the Holy Country


The Rhino riders are a solitude-loving folk, who generally live in small family groups.
Both the other Praxians and the Rhino folk themselves agree that this is what led to their near-demise, as other, better-organized, peoples bushwhacked the Rhino folk and overcame them one by one.
The Rhino Riders still live in small family groups, but they are now organized into septs, and in any given area, all the family groups of a sept are generally no more than an hour's ride from the next family group, and if a family is raided, the avenging Rhino patrols are on the move soon.

The Rhino riders are still the hardest to beat in a fight of any people in Prax, and that accounts for their continued survival, despite the limitations of their beasts.

At the Dawn, the Rhino Riders were as large and as important as any of the other five -- if someone had invented a Nomad Gods game for the First Age, it would have included the Six Great Tribes of Prax.
And probably would have had Plains Elk, Nose-Horn, and Long-Noses among the Independents.

Breeding occurs year-round, and the gestation period is a year and a half.
The calf weighs 40-65 kg (90-150 lbs) and is wobbly for 2-3 days.
When alarmed, the calf runs _ahead_ of its mother, unlike most other herd beasts, which follow their mothers.
Weaning commenses at only 2 months, but nursing continues sporadically for over a year.
Females give birth every 2-3 years, and drive off their latest calf just before they give birth.
Sexual maturity comes at 4-5 years, but females won't have their first calf till they're 7 or so, and most males won't mate till they're at least 10-12.
They live up to 40-50 years, and females remain fertile almost till they die.

Most important is that rhinos live a very long time, and have a very long breeding lifespan -- a female rhino will breed the age of 7 till 40 or more, which means it will have 11-17 calves in its lifetime, assuming she never twins.
A high llama cow stops breeding at age 20 or so, breeds every two years, and is sexually (but not physically) mature at age 3.5 -- in her lifetime, she'll have about 6-10 calves.
Bison and sables have similar numbers, though impalas do breed somewhat more quickly.

It is not breeding rate that determines a beasts' ability to dominate terrain -- it is a combination of breeding rate and longevity/hardiness.
All animals reproduce more quickly than their environment can handle.
Rhinos are no different.

Rhino Riders are kept small in numbers because of their original social system, not because of their animals.
The Rhino riders are a solitude-loving folk, who generally live in small family groups.
Both the other Praxians and the Rhino folk themselves agree that this is what led to their near-demise, as other, better-organized, peoples bushwhacked the Rhino folk and overcame them one by one.
The Rhino Riders still live in small family groups, but they are now organized into septs, and in any given area, all the family groups of a sept are generally no more than an hour's ride from the next family group, and if a family is raided, the avenging Rhino patrols are on the move soon.

They have tiny little "herds", occasionally consisting of just one rhino, the father's personal steed!
Alone among the Praxian tribes, they often keep foreign animals to _milk_, rather than to fatten for slaughter.
They probably eat more vegetable matter than any other tribe, but this doesn't mean they don't like to hunt.
They do, but their steeds aren't suitable for all hunting styles.
So they are hunter-gatherers, like other tribes who cannot live off their beasts.
This, too, is the Way of Waha.

A rhino rider is "living off his beast" when he uses it to hunt and defend his family just as much as is a bison rider living on bison steaks and kvass.
The rhino survives because its owner tends it, and the owner survives because the rhino supports him.


Q: how does a Wastes and Prax rhino look like?

A: They are traditionally considered to be like the African White Rhino (two horns).
I do not believe there are two rhino species in the Wastes.
I know that there are several species of Pamaltelan rhinos, including the infamous Indricotherium.
I expect to find jungle rhinos (like the one-horned Indian variety) in Fethlon.
In fact, I fully expect to find rhino hsunchen there!

Q: What’s the Rhino Graze in the Wastes?

A: Do you mean the Rhinoceros Rocklands? That boulder strewn region is where Great Rhino was killed in the Gods War.
His spirit is strongest there and it has the best grazing for Rhinos.
It is a natural pilgrimage site for the thinly spread Rhino Tribe.

A2: Don’t forget that good grazing for one beast might not be good for another.
Some might prefer arid conditions, others boggy areas, others shrubby, others tall grassland and so on.
Prax and the Wastes are full of different terrain types, they are not one huge sea of chapparral.

Q: Who killed the Great Rhino?

A: Borderlands tells us:


The Great Rhino was either the Founder of the Rhino Riders of the Father of the rhinos themselves. He was slain in the Godtime, but was resurrected after the fall of Old Pavis to help break down the walls of the city. He gave his aid freely, but would never work against his children.


The answer is anyone you like as long as it adds to you game. That Great Rhino’s spirit was recovered and was able to be brought into the Middle World means that it wasn’t destroyed completely. So it could have been a God’s War fight, the coming of Death, monsters in the Great Darkness, etc.


Under the Covenant, rhinos behave like herd beasts.
One of the effects the Covenant has is let undomesticated animals live in much closer proximity than normal.
So normally solitary rhinos will happily live in tight herds.
As soon as a wild beast enters a herd it becomes a herd beast.
There is a welcoming song that binds them to the Covenant, and one to welcome other types of herd beast into the herd. 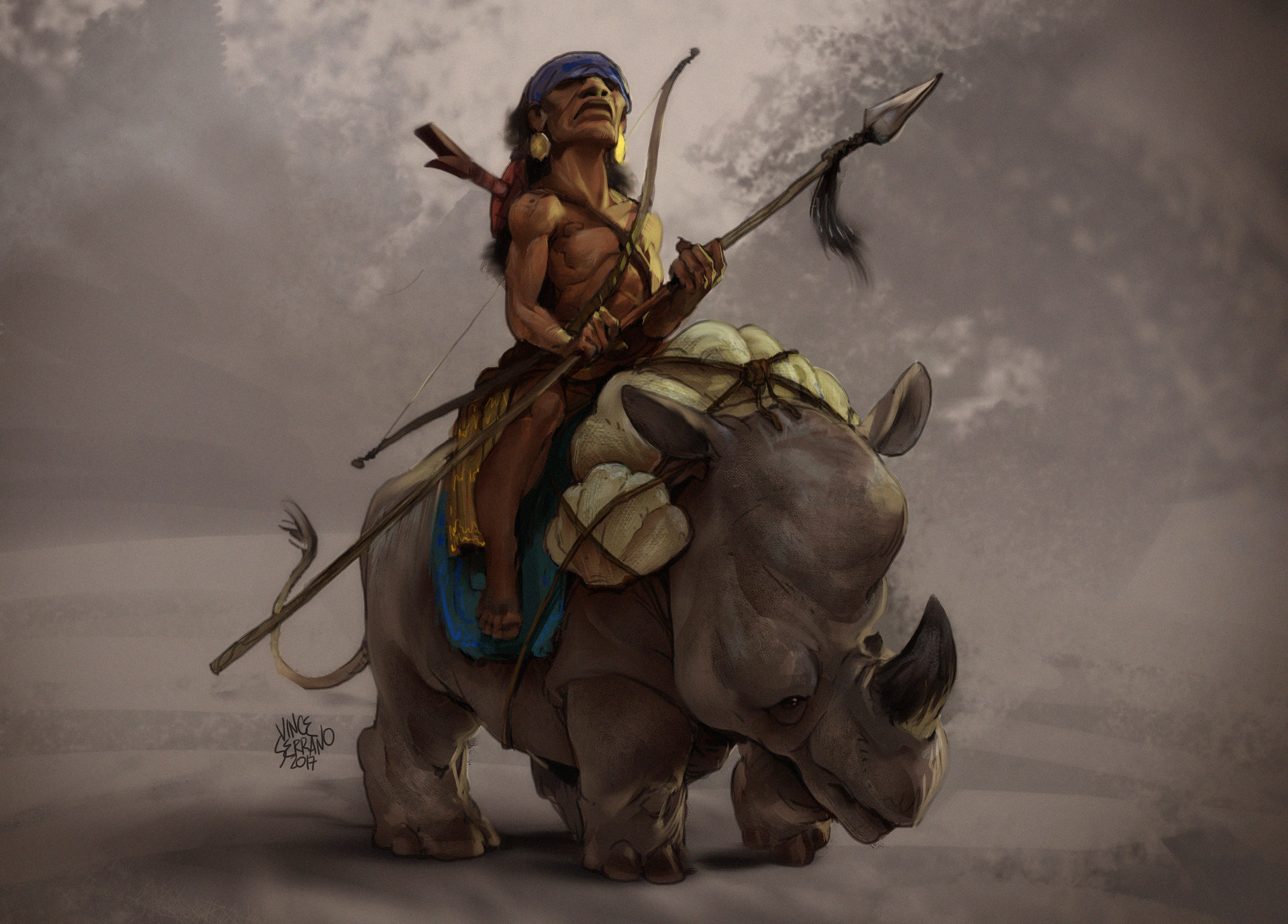 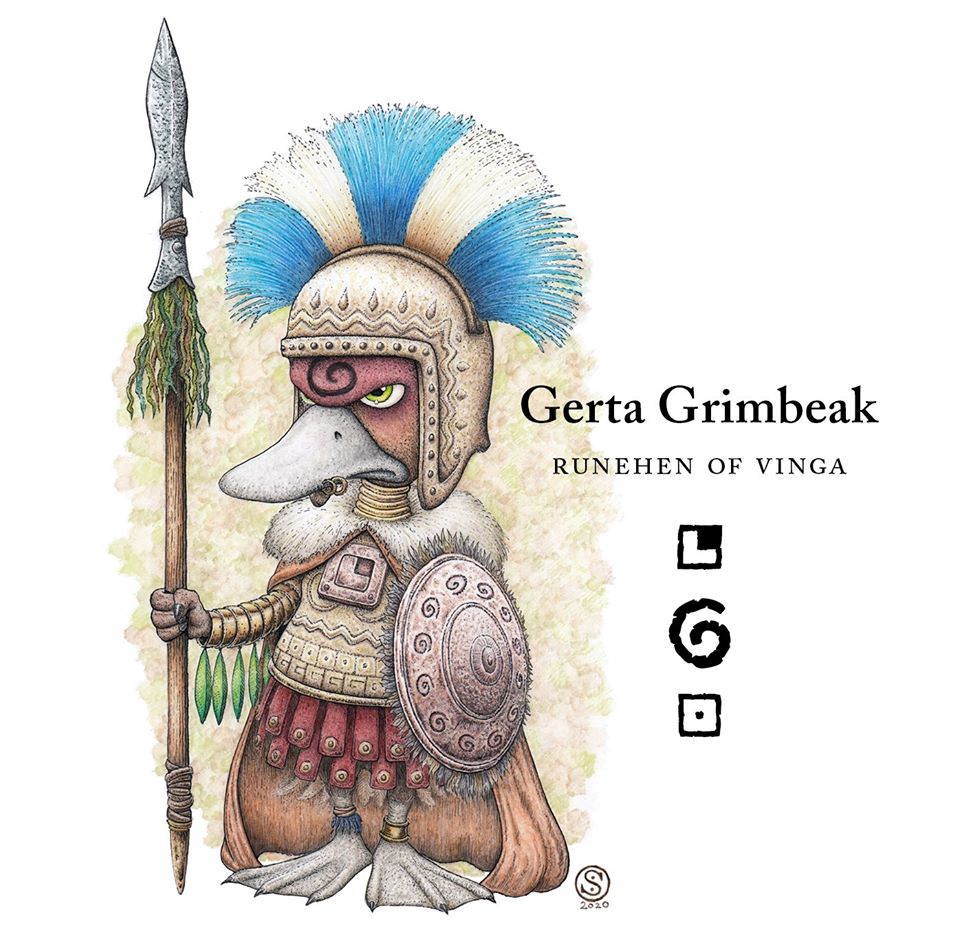 Extrait:
♫ Mothers: I see a little
Silhouetto of a Moon:
Jakaleel! Yanafal!
Let’s go travel and journey:
Thunderbolt and lightning,
Orlanth’s trying to frighten me!

Teelo: I’m just a poor girl,
Nobody loves me.

Mothers: She’s just a poor girl
She’s got no family:
Take her Young Life
So our Goddess can be! ♫ 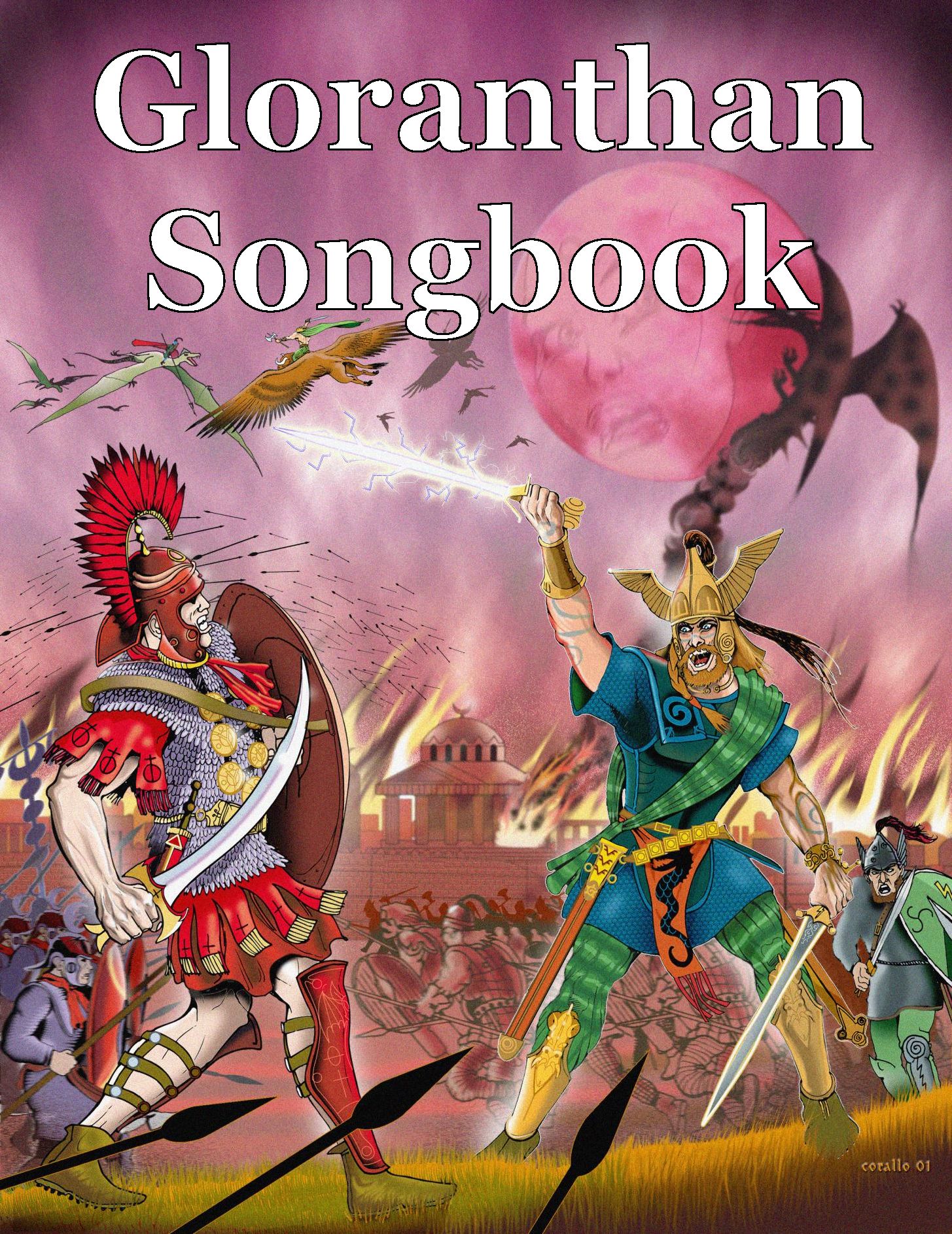