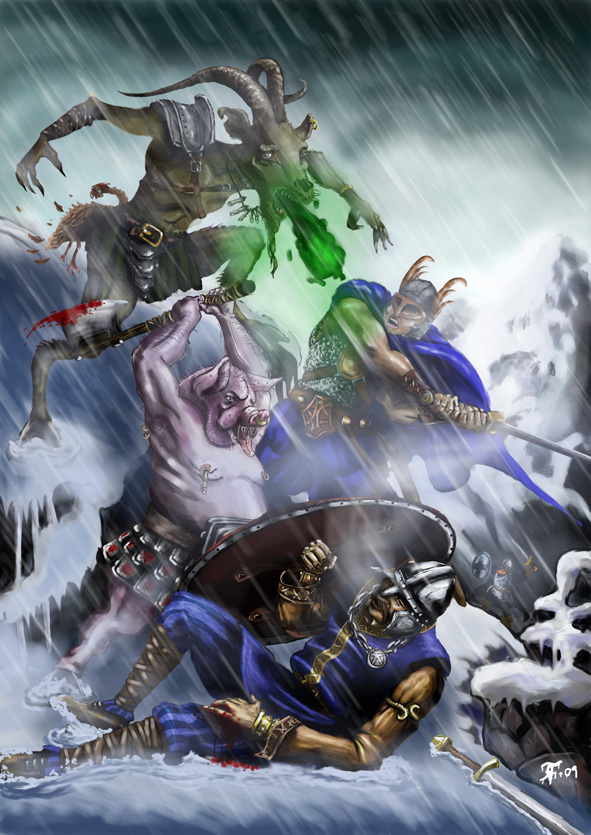 A Rough Guide to Glamour is your indispensible companion for any visit to the capital city of the greatest empire the world of Glorantha has ever known!

This book contains:
• A comprehensive map, gazetteer and guidebook detailing the capital of the Lunar Empire;
• Portraits and descriptions of eleven Very Important People who can be encountered there, including Moonson, the Red Emperor, and the Lunar hero Jar-eel the Razoress;
• A description and map of the Sultanate of the Silver Shadow, the throbbing heart of the Lunar Empire;
• Sweeping overviews of the geography and history of the Lunar Empire;
• RuneQuest writeups for the cults of the Red Emperor, immortal wizard-ruler of the Lunar Empire and the goddess Glamour, the humble nymph who became the First Inspiration of Moonson;
• Insights into the secrets of Kalikos Icebreaker, the Lunar College of Magic and the Imperial Monopolies of the Etyries cult;
• Never republished supporting material from the legendary fanzine Tales of the Reaching Moon;
• Rumours, fiction, poetry, and more besides!

This is a thoroughly revised and expanded edition of the original Rough Guide to Glamour,written by Chris Gidlow, Mike Hagen, Nick Brooke, Michael O’Brien and friends, lavishly illustrated by Dario Corallo, Simon Bray, Julie Hudson and other artists.
Foreword by Jeff Richard, Chair and Creative Director of Chaosium Inc.

A Rough Guide to Glamour was first published as a players’ background book supporting Reaching Moon Megacorp’s Life of Moonson, a 50-player live-action role-playing game that debuted in 1997 and ran in the United States, Europe and Australia.


The 1998 edition of the Rough Guide to Glamour (with red card covers: the most complete version) contained about 29,000 words.
We have cut out a third of the book: sections either reprinted in or made redundant by the Glorantha Sourcebook (eg: The Lunar Pantheon, Dart Competitions & New Year Ceremony) and sections primarily written to support the freeform Reaching Moon Megacorp's Life of Moonson (eg: Recent History, a list of Sultanates, Provinces etc. and their rulers).
So there are 20,000 words from the old Guide remaining.

The Jonstown Compendium edition of the Guide contains more than 50,000 words.

Most major sections are significantly expanded (eg: the Gazetteer is 60% longer, detailing 117 locations in Outer Glamour; the Rough Guide itself has two new pages on Holidays and Festivals).
We have incorporated material from the Guide to Glorantha (a full writeup of the Silver Shadow Sultanate, with a new map by Colin Driver), from Tales of the Reaching Moon (Cult of the Red Emperor, Lunar Government, Satraps & Sultans, Letter from a Monopolist, A Visit to Glamour), and from the epic Yolanelathon (three interlinked stories by MOB and myself, presented at various conventions in the nineties but never collected under one cover).
There is a new 4,000 word writeup of the Cult of Glamour by Jeff Richard, plus obscure rumours, fragments and oddities scattered throughout (eg: Antiquities of Old Glamour, Red Empire, Pelorian Rhapsody, Annual Dinner of the Lunar College of Magic).

If you liked the original Rough Guide to Glamour, we think you'll like this version even more!


The beautiful cover art is by Dario Corallo, a wonderful Gloranthan creator, and Julie Hudson, whose perspective view of the Imperial Capital can’t be bettered.

"Elvis" is Moonson Argenteus, the Red Emperor, son of the Red Moon Goddess, your sovereign ruler.


We still need a few last bits of art; and there’s one article that could do with a bit of work; and another article needs a tedious round of date-checking to make sure it’s set in 1626 this time... but all in all, I’d be a bit startled if this baby isn’t out before Easter.


The book's currently 109 pages long. The Sultanate of the Silver Shadow chapter takes up four of those pages, including maps (one page), a key excerpt from the Zero Wane History (half a page), and my article on Satraps & Sultans (half a page). There are around 1,300 words from pages 317-319 of the Guide to Glorantha, being the whole of the Silver Shadow section (with one minor edit, to merge the essentially identical Joy Rest and Volthena entries).


Satraps and Sultans
It's hard to know what to call the territorial rulers of the Lunar Empire: our oldest sources unanimously call them 'Sultans', while more recent material has adopted 'Satraps'. This is my attempt to explain and reconcile the confusion, and get some game value out of doing so.
http://etyries.albionsoft.com/etyries.c ... traps.html 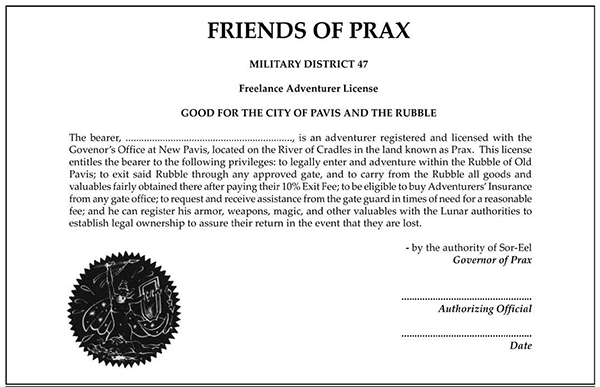 
In honor of our friend and game developer Clint Staples, we are re-running all of his terrific #Runequest Thursday posts from the start!
In this initial one he adapts a #DnD cantrip into a "Minor Thaumaturgy" spell for #RQ.
https://d-infinity.net/game-content/run ... thamaturgy

Old Jack is the colloquial name given by locals to a large and dangerous jackobear that wanders the River of Cradles region from Sea to Darkness seasons, before heading into the eastern wastes of Vulture Country for the rest of the year.
https://d-infinity.net/game-content/run ... 2-old-jack 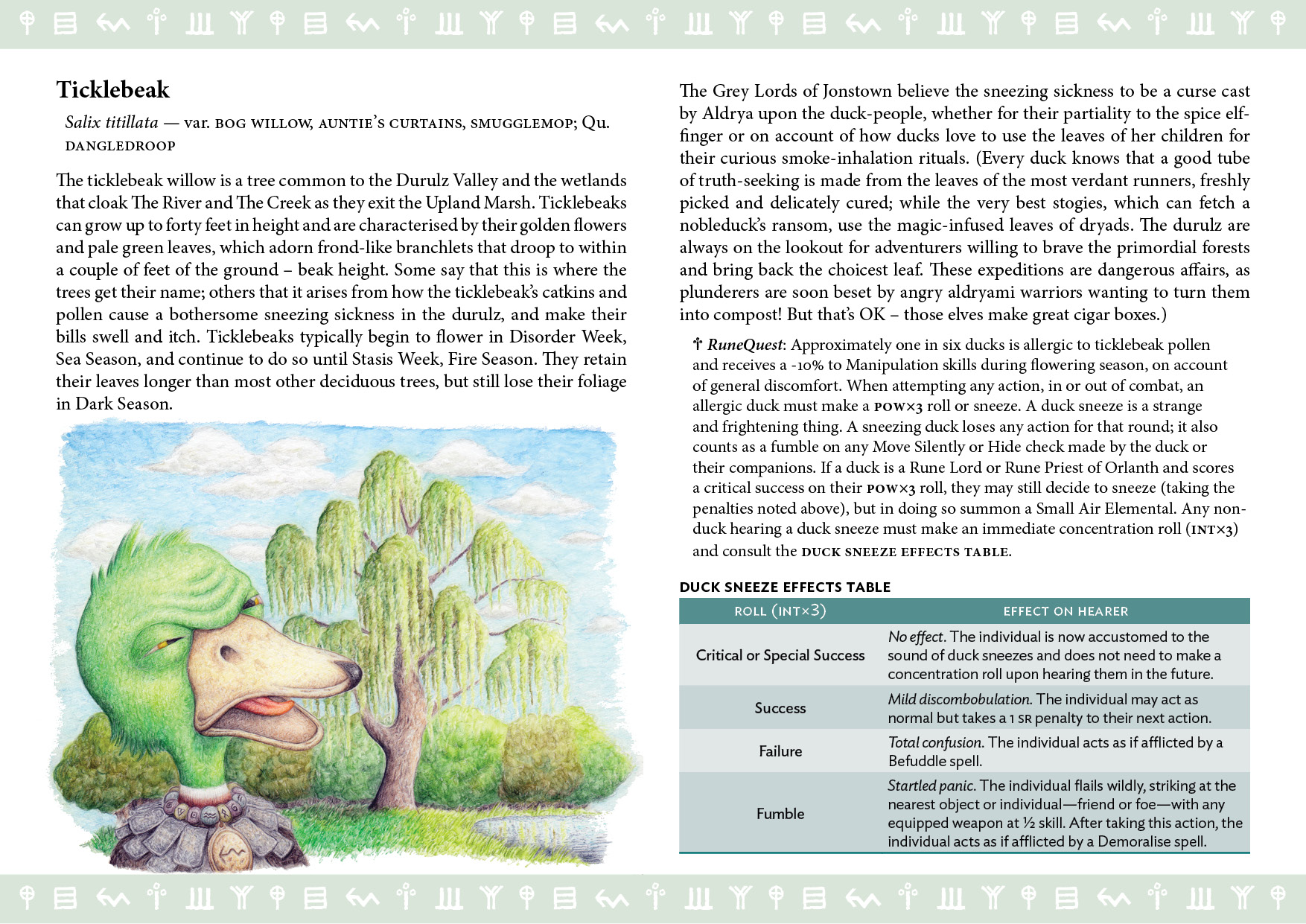 
EXTENSION
Perhaps one of the most misunderstood or abused Rune spell is Extension (RuneQuest, page 328), particularly when it interacts with certain other spells.

BERSERKER
A common question about the Berserker Rune spell (RuneQuest, pages 319–320) is what happens, exactly, when the spell ends.

AIMED BLOWS
This rule should have been in the core rules, but somehow got missed. (Faux c'est page 197)

TWO-WEAPON FIGHTING
Two-weapon fighting (dual wielding) is another of those issues that seems clear enough on paper to the designers and yet confounds many players and gamemasters are the rules for two-weapon fighting.

"Whose Glorantha Is It Anyway"