I'm working on an adventure sourcebook with a chapter explicitly concerning the Wild Temple.


Some history first, then some culture:

About 500 years ago, give or take, there was the Empire of the Wyrms Friends (EWF), a mighty empire that worshipped, emulated or became dragons. They went off to forgotten magical realms and brought back many new, or old, races, including ducks, centaurs, minotaurs and many more. These were used in gladiatorial games, as playthings for the elite and as lovers, slaves and warriors. However, the EWF came to a sticky end as their leaders betrayed them, their captains were killed and a mighty horde came from the West to sack the empire. Then came the Dragonkill. This was when dragons from all ages materialised and killed almost everyone who attacked the EWF, and a large number of EWF citizens in the process. This was the mother of all disasters, if not the grandmother or great-grandmother. The Dragonewts, or the Dragons, or somebody else, as nobody remembers, then built the Crossline, or Death Line, a row of Death Runes that formed a barrier to those who would come from the south and the north. To the north of the southern Crossline was a valley where many of the beasts that had been used as entertainment by the EWF came. One of their number was a mighty Centaur Hero named Ironhoof. He took Beast Valley as his own and made the beast people safe there.

After a couple of centuries, people ventured northwards and resettled the land that is now called Sartar. However, they tended to leave Beast Valley alone, as it was full of monsters. A Hero called Sartar founded his kingdom and made friends with Ironhoof, granting the beasts sovereignty over the land. North of Beast Valley was a ruined temple to a Sun God of the EWF, and light cultists gravitated there, setting up a new temple. When the sun cultists of Sartar split, many went southwards to the temple and formed a new colony of sun-worshipping Yelmalians in Sun County.

So, that's the history.

Now for the culture of Beast Valley.

It is full of beasts, and beasts are the only ones officially allowed to live there.

Ironhoof the Centaur Hero rules there and sires many children with his herd of mares. Although Ironhoof is a centaur, he does not grant centaurs privileges and they live as one of many races there. Beast Valley is a place of harmony, where everyone lives in an idyllic way, close to nature and friendly to everyone. Nymphs frolick in the hills and valleys, in the waters and caves, befriending the beasts. Minotaurs stride majestically through the woods, greeting the elves and dryads, carrying axes that pose no harm to the trees. Ducks live alongside the ponds and streams of Beast Valley, protected from outside harm. Fauns and Satyrs have their bucolic fun in the pastures and meadows, enticing maidens and nymphs into their special fun. Centaurs roam the pastures, meadows and plains, living in family herds. Fox women giggle from the bushes and wolfmen roam the woods, but both are harmless. Get the picture?

Of course, nothing is what it seems.

This is a Wild Place. There is a Temple called Wild Temple, where the Nymphs and Beasts gather for wild, orgiastic ceremonies to various gods and goddesses of nature and the wilds. They even have blood sacrifices there, on occasion. Humans, except for the occasional Grazelander, are definitely not welcome, as this is a place of Beasts. Centaurs are aloof, Minotaurs are bestial and savage berserkers, satyrs and fauns are seducers of women, fox-women are temptresses of the highest order, wolfmen are savages who eat babies, ducks are outlaws and cowards, but all are united in their distrust of humans and their desire to keep Beast valley ruled by beasts.

Four short scenarios united by the theme of pilgrimage.
They were written to be part of a collection of scenarios like "Waha's Quest" from Different Worlds 4, and could be considered as low-power heroquests.

1. Starting from Swenston
This is a major Orlanth pilgrimage. In it, the party travels to the Old Wind temple.

2. Hooves Of Fury, Or Dances With Bulls
This pilgrimage allows Storm Bull cultists to recreate the life of the Bull, climaxing in battle against the Devil.

3. Ducks Are People, Too
This pilgrimage allows Ducks to honor Grandfather Drake.

4. Swords In Service Of Death
The basic pattern of this Humakt pilgrimage fits many hero cults.


Sootfeather the Oakfed cultist. With his pet rubble runner, Gobbles. (And some finest mock-pork sausages.) 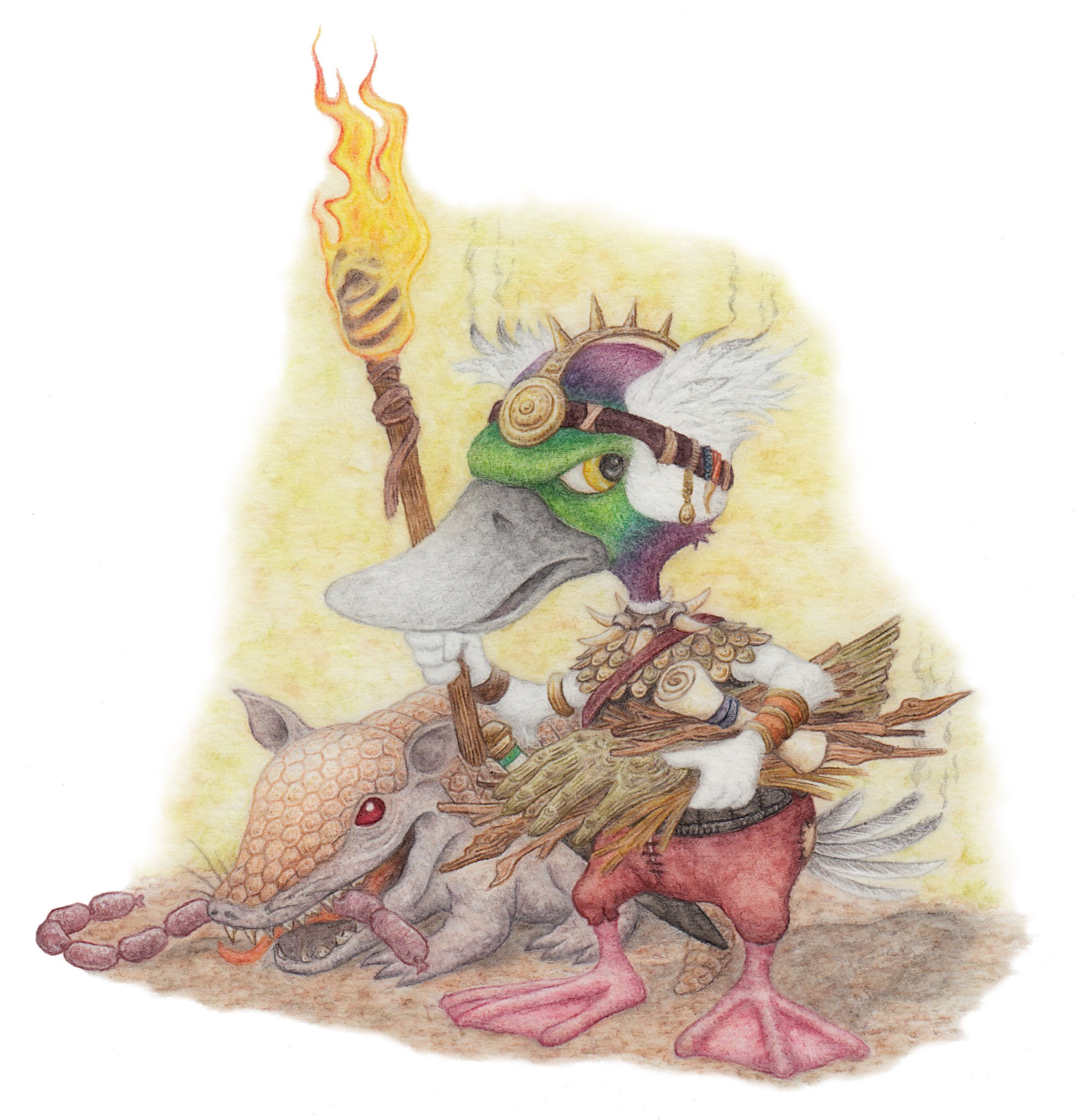 
This game (WB&RM) is largely responsible for defining the part of the world that has been popularized in subsequent gaming.
As I mentioned elsewhere, the game was not even originally set in Glorantha, but after working on it for a while I realized that it fit very nicely into a large blank spot on my previous maps.
Thus it was the first time that I discovered the Lunar Empire and Sartar.
Thus the game established one of the distinct tropes of Glorantha: the red moon.


I wanted to make a game that had no fixed territorial objective. I’d never seen such.
I had recently read a book about the nomadic peoples of central Asia, and was considering a game in which the nomads were the antagonists, and the empires of Rome, the Middle East, India and China were just targets to be victimized.
I transferred ideas from that to the fantasy game.

This game was my first exploration of Prax, its peoples, and of the lost city of Pavis.
I had wanted to make the nomadic tribes distinct, and decided that differentiating the creatures they rode would be a good way to individualize the tribes.


Years earlier, by strange chance, Greg Stafford received what may have been the first copy of the original Dungeons & Dragons (1974) ever sold. Jeff Platt, an ex-partner of Stafford’s who lived in Lake Geneva, Wisconsin was picking up catalogues from a printer and there he ran into a young man named Gary Gygax who was himself picking up the first printing of Dungeons & Dragons. Stafford’s ex-partner knew that Stafford was working on a fantasy game too, and so he purchased a copy of Dungeons & Dragons from Gygax — straight off the press — and mailed it to California.