I have created a group focused on noncombat Glorantha and to provide resources for those who want to play clan level games: The Clan Hearth

"This discussion group is focused on women's issues, goddess worship, family politics, household magic, husbandry and other topics of daily life in Glorantha.
This group is system neutral and for all Gloranthan gaming.
This group is not about battle, combat rules or military conquests."

Anyone who wishes to discuss the above topics is welcome regardless of gender.

Why a separate group? I would like to tap this group for ideas on a woman and home-focused Gloranthan (free) supplement for the Jonstown Compendium and it will be way easier to organize that way.

Gratuit:
RPG REVIEW Issue #44: this is a special issue for RuneQuest Glorantha Con Down Under IV convention.

It includes the following content:
. Interview with Jason Durall,
. Greg Stafford Appreciation,
. RuneQuest Glorantha Con Down Under III review,
. Recollections of Delecti,
. Metaphysical Musings of the Scholar Wyrm,
. Bronze Aged Economics,
. Askar the Wizard of Atlantis,
. a massive double-session scenario for RQ, HQ, Pendragon, and 13th Age: "Last Night with the Vigiles" and "A Branch of Evil", set in Rhis (a city in the Seshnelan Country of Castle Coast). 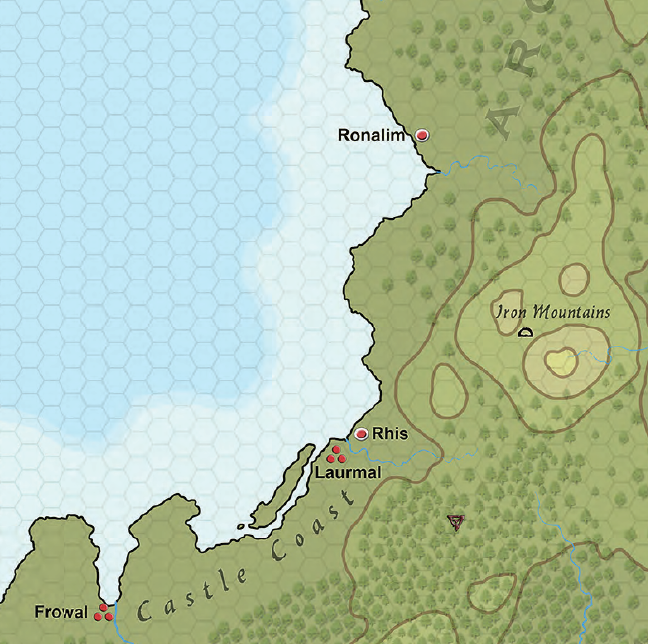 
An old cottar died. But he didn't stay dead - every night he returns to his family's cottage and eats all their food. 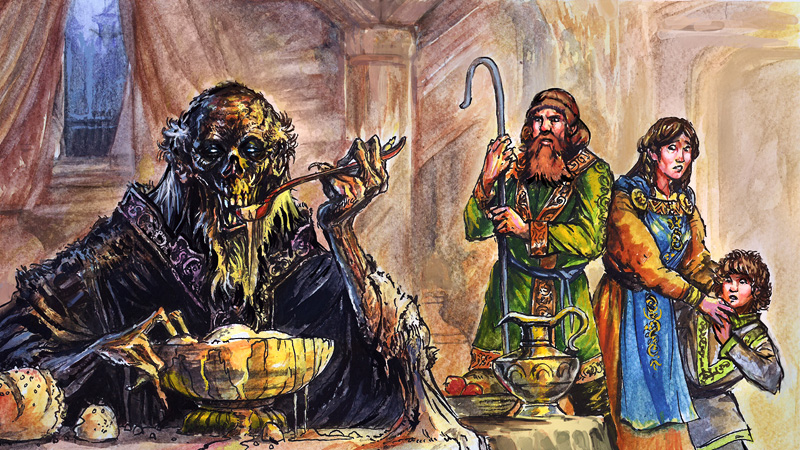 Their stats are described in Glorantha Bestiary, authored by a
brilliant underpaid Gloranthan scholar. There's a few notes on their
culture there, but here are a few more for good measure. The Slarges
are a sort of reptile-men which come in two sizes, Great Slarges and
Lesser Slarges. The two types alternate generations (i.e., the
children of Lesser Slarges are Great Slarges).


Great Slarges are individualists, each seeking to better itself or
its race in its own special way. One might have as its life goal the
interbreeding of triceratops with slarges, while another might have
chosen to destroy all humans south of the Ermag River. Lesser Slarges
go in packs and are more magical, less individual, and more
cooperative.


Slarges forge metal (no one knows how), but use a special type of
metal known to the Tarien Doraddi only as slarge-metal. It hurts for
a human to touch slarge metal with his bare skin, not as bad as iron
vs. elves, but bad enough. Slarges herd dinosaurs, or hunt them, and
have no cities (maybe far to the west?).

Notes: stats can be found in:

>The Slarges live in Wongarissi. This is one area of glorantha, I
>would like to know more about (from a safe distance of course!)

>I know the slarges culture is obviously based around the whims and
>curiousity of the big'uns and their magic ranges from Shamanism to
>Sorcery(!) and yet they have no observable cities or urban
>settlements. I'm thinking that the philosopy of the big ones
>basicly revolves around experimenting with the world as such and the
>little ones are their children to obey. I don't think they have any
>gods to worship (although their shamans will know of some big
>spirits). Does anybody have more info about them other than whats
>been said of in elder secrets?

As originator of the damn slarges, it is clearly my duty to do some
description here.

SEX (oh baby): At the risk of tedium, I'll repeat some data
from my Gloranthan Bestiary. Slarges have a rather peculiar
life-cycle. Lesser Slarges (so-called by humans; no one knows what
they term themselves) are smallish reptile beings that give live
birth. They seem to have two sexes. The children of the Lesser
Slarges grow up into Giant Slarges.

Giant Slarges are hermaphroditic and never mate. Instead,
they parthenogenetically spawn large clusters of eggs, which hatch
into Lesser Slarges. Thus the cycle repeats again. Of course, the
cycles are all mixed up by now, so that the slarge population is a
mixture of Giant and Lesser individuals. Most slarges encountered are
Lesser, which may have a higher survival rate than Giants. Or perhaps
it's just that Lesser Slarges are more aggressive and go in packs, so
they're simply more likely to encounter humans than their solitary
sires.

LESSER SLARGES are highly social and invariably found in
groups. They are quite hostile to humans -- at least as hostile as
are most trolls. Lesser slarges have been seen to fight one another,
but always one-on-one, with the others watching. Perhaps these are
dominance fights, or something else. The loser is rarely killed, so
it would appear that slarges are more cooperative within their own
species than are humans. Lesser slarges do not make towns or cities,
but are nomadic, like broos or certain humans. They do not ostracize
the giant slarges, but not uncommonly have one or more of these
individuals with them.

Lesser slarges are not workers. They do not make weapons or
armor, or produce anything but the most trifling artifacts. They
appear to have little or no artistic impetus, but are entirely given
over to the arts of fighting, hunting, and working. Their skills are
generally wholly practical in nature, as are the spells they learn.

Lesser slarges are perfectly able to become shamans, but they
are not particularly great at this -- perhaps because of their lack
of creativity. Lesser slarges DO appear to be the "leaders" of the
Slarge species, at least insofar as they provide the drive and
ambition to spread across the plains, thrusting aside the humans as
they advance.

GIANT SLARGES are solitary, and are known to build structures
in which to house themselves. These creatures are not as hostile as
lesser slarges (which is not saying much -- they can still be very
dangerous), and a few have been known to interact with humans on at
least a neutral basis; trading food for magic, stuff like that.

Giant slarges are highly creative and curious beings, each
spending its life in some particular labor (perhaps this is their
sublimated sex drive kicking in?). There is some overlap between
Giant Slarge "hobbies", and even some evidence of collusion -- for
instance, at least one Giant Slarge metalworker is found in each
large section of territory, but rarely more than one. Some human
theorists reason that the giant slarge hobbies are chosen by the
lesser slarges, either by the giant's parents while raising the
whelp, or after adulthood, by a committee of lesser slarges. Another,
less-popular theory is that there is a single particular giant slarge
who travels around the Wonggarisi, telling the other slarges what to
do, as _his_ hobby.

GOVERNMENT: the lesser slarges are manifestly in charge. The
giants are artistes and philosophers, who sit back and are enormously
self-centered, concerned with their species only intellectually. The
lesser slarges have the drive and ambition to rule the slarge race,
and do so. They do not appear to have a central government, and when
a lesser slarge sees something that needs to be done, he gets his
gang to do it. It is believed that the instances of "dominance
battles" amongst lesser slarges are NOT to determine leadership, but
are violent differences of opinion as to what course of action the
group is going to take next.

MAGIC: slarges have unusual magic. Perhaps they are trying to
displace human spirits as well as the human species? They have a
number of otherwise-unknown spirit spells, such as "Padding" and
"Anti-Healing".

SOME SLARGE SPELLS:
Padding (variable): each point adds 1d6 false hit points to
each hit location of the slarge. Roll once, and add the same amount
to each location. For instance, if a 4-point Padding were cast, and a
14 were rolled on the dice, the Slarge would add 14 points to each
hit location. These extra hit points are "outside" any armor or other
defensive spells, and are eaten up first, before any damage is done
to the slarge.

Anti-Healing (variable): an attack spell. If successful, the
target loses 1 hit pt per pt in the Anti-Heal in a single location
chosen by the attacker.

The dreaded CYCLE: This is not a spirit spell, but Something
Else. It is hard for the Slarges to do, and presumably it costs them
permanent POW or something, for it is rare, and usually aimed only at
a human leader. This spell is hated and feared, as its effects are
permanent and little-understood. In effect, it changes all the
targets' characteristics as follows: his STR becomes his CON, his CON
becomes his SIZ, his SIZ becomes his INT, and so forth, clear-round,
until his APP becomes his new STR. Of course seven applications of
Cycle will bring you round full-circle back to where you started.

Some researchers believe that certain Giant Slarges have used
the Cycle spell to give themselves enormous INT or POW (by using
their great SIZ).


Slarges are sometimes believed to know sorcery or divine
magic, and maybe they do, but it is also possible that they are
learning mysterious extra magic of their own that is not spirit
magic, but Something Else. Mysticism? Draconic magic? Who knows?

SLARGE METAL: the slarges produce their own particular type
of metal which, for lack of a better name, is called "Slarge Metal".
It is the only metal known to most inhabitants of Tarien, anyway.
Slarge Metal is nasty stuff. It is irritating to the touch (for a
human, not a slarge), and prolonged contact with it causes a skin
rash and eventually ulceration. Presumably it was created
specifically as an anti-human weapon, for it does not have this same
effect on reptiles, especially slarges.

A location injured by slarge metal is harder to heal -- one
additional point must be healed in order to cure the wound, even for
first aid. If a single attempt at healing does not completely repair
the location, second (and third) attempts must also heal an extra
point. For instance, if your thigh took 6 points of damage from a
slarge metal speartip, and you applied First Aid, rolling a 3 for pts
healed, only 2 pts would actually be cured, leaving you with 4. If
you then cast a Heal 4, only 3 points would go away, leaving you with
1 still. And that 1 would require at least a Heal 2 to cure. 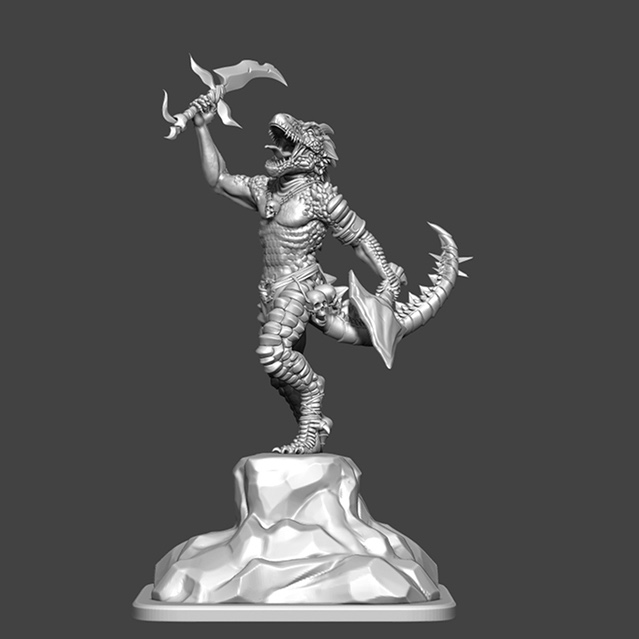 
Just published via the Jonstown Compendium - a fancy version of my comparison chart for Pavis & Big Rubble (RuneQuest Classic / Glorantha Classic, 1982-83), River of Cradles (RuneQuest 3rd edition, 1992) and Pavis: Gateway to Adventure (HeroQuest Glorantha, 2012).
This short document contains side-by-side Tables of Contents and lists the Maps, Cutaways and Views in all three sourcebooks.
Cover artwork by Matthew Cole (from his New Pavis Renovations project). It's a free download. Enjoy! 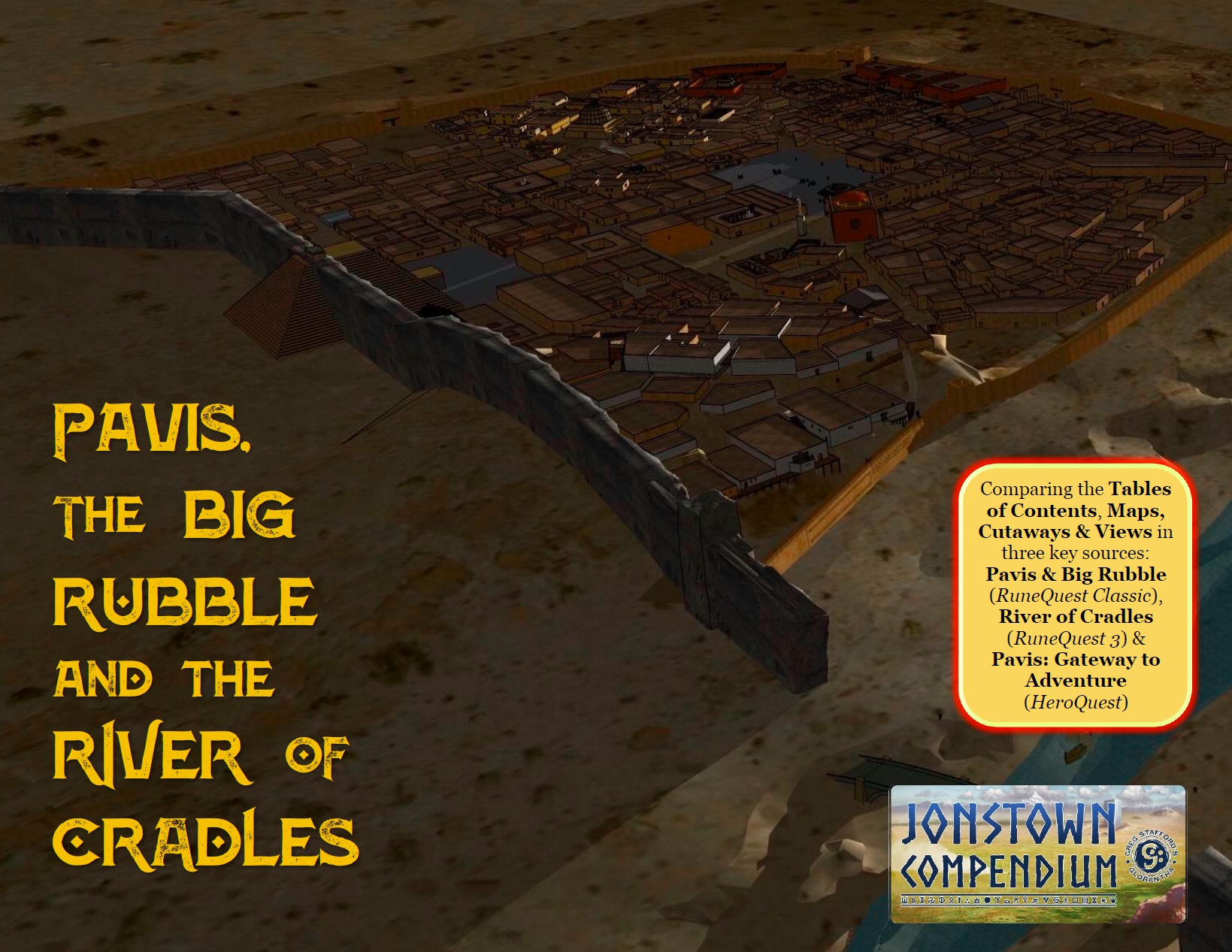 
I wasn't sure I could put this up on the JC, so I checked with Chaosium first and they were absolutely fine with it. (So: if you're thinking of doing something and aren't sure whether or not you can distribute it via the JC, why not ask those nice folks at Chaosium?) 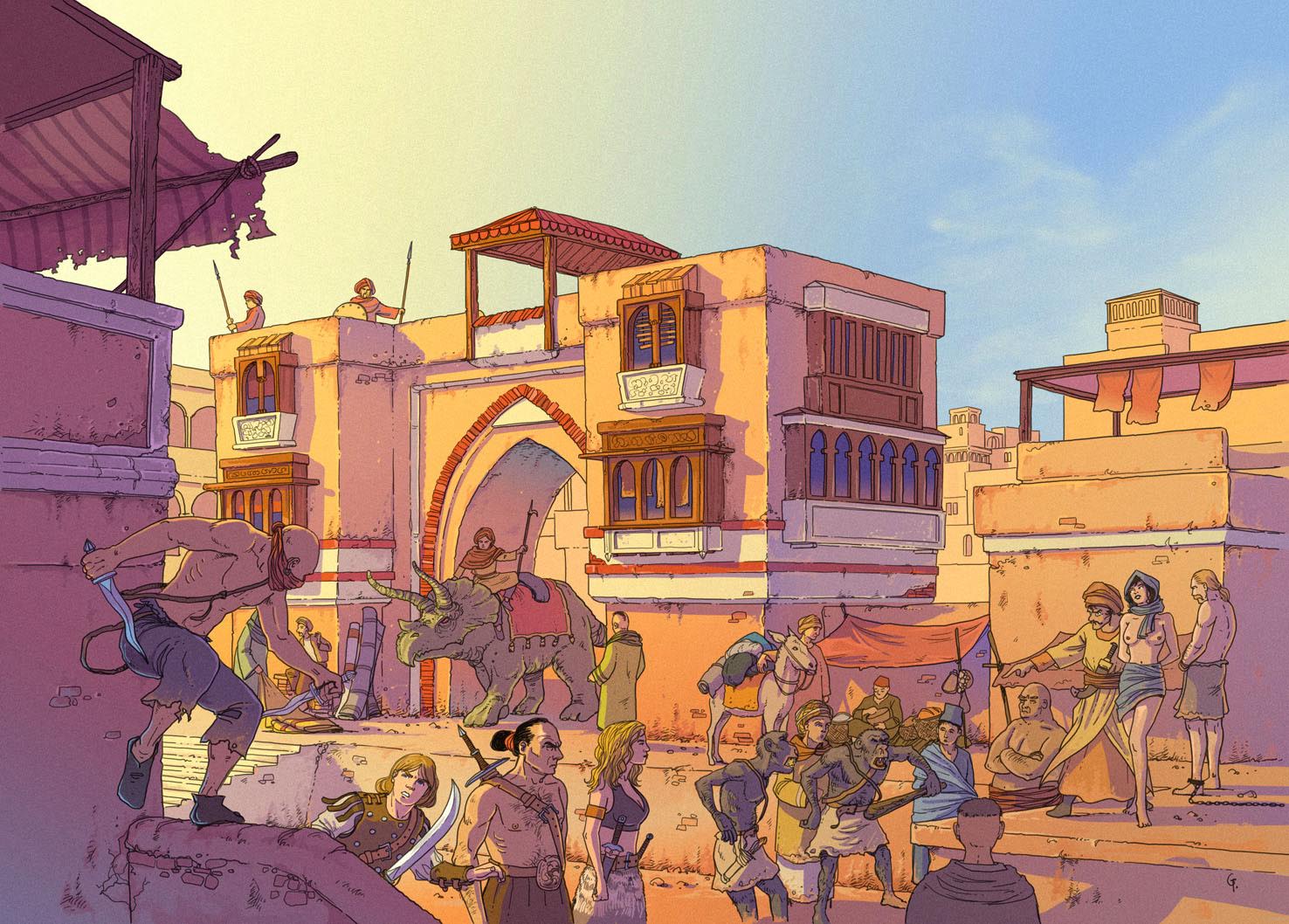 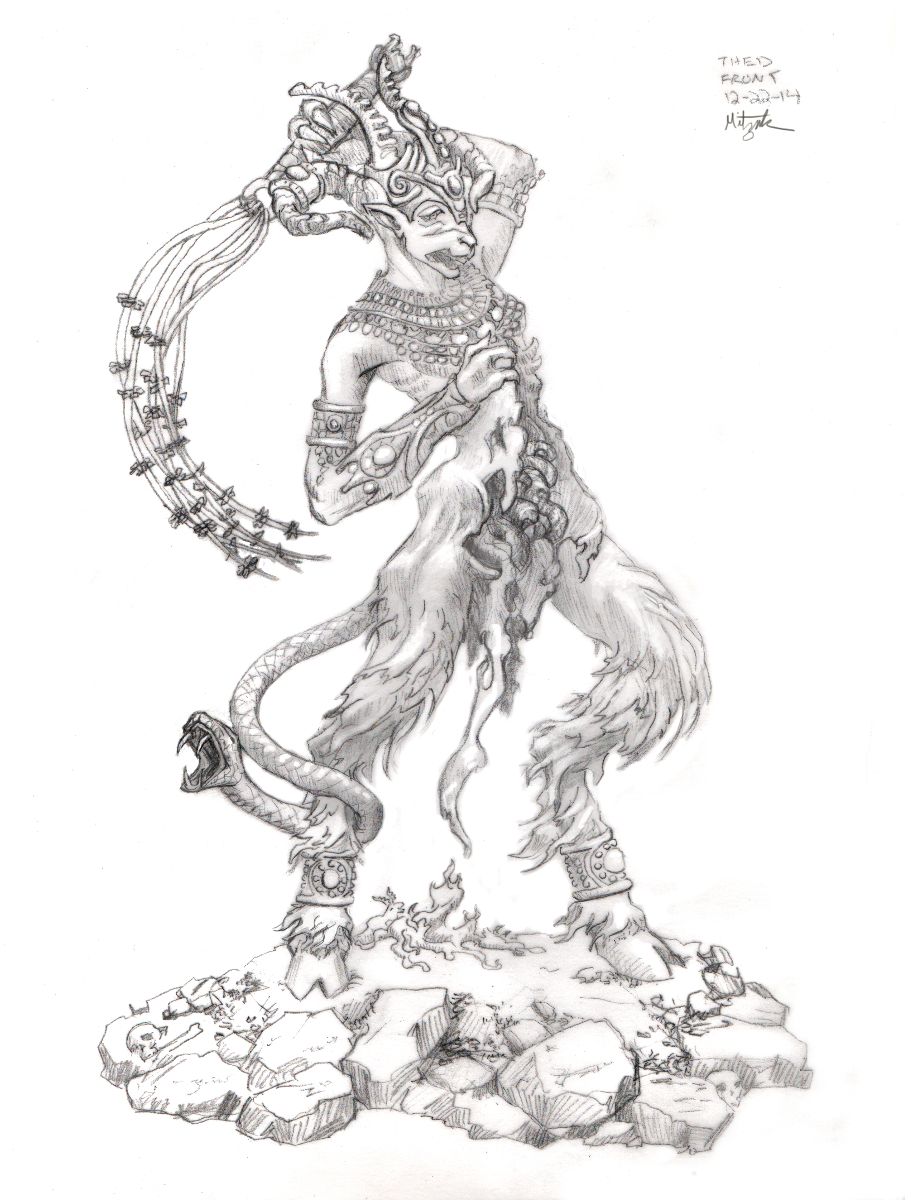 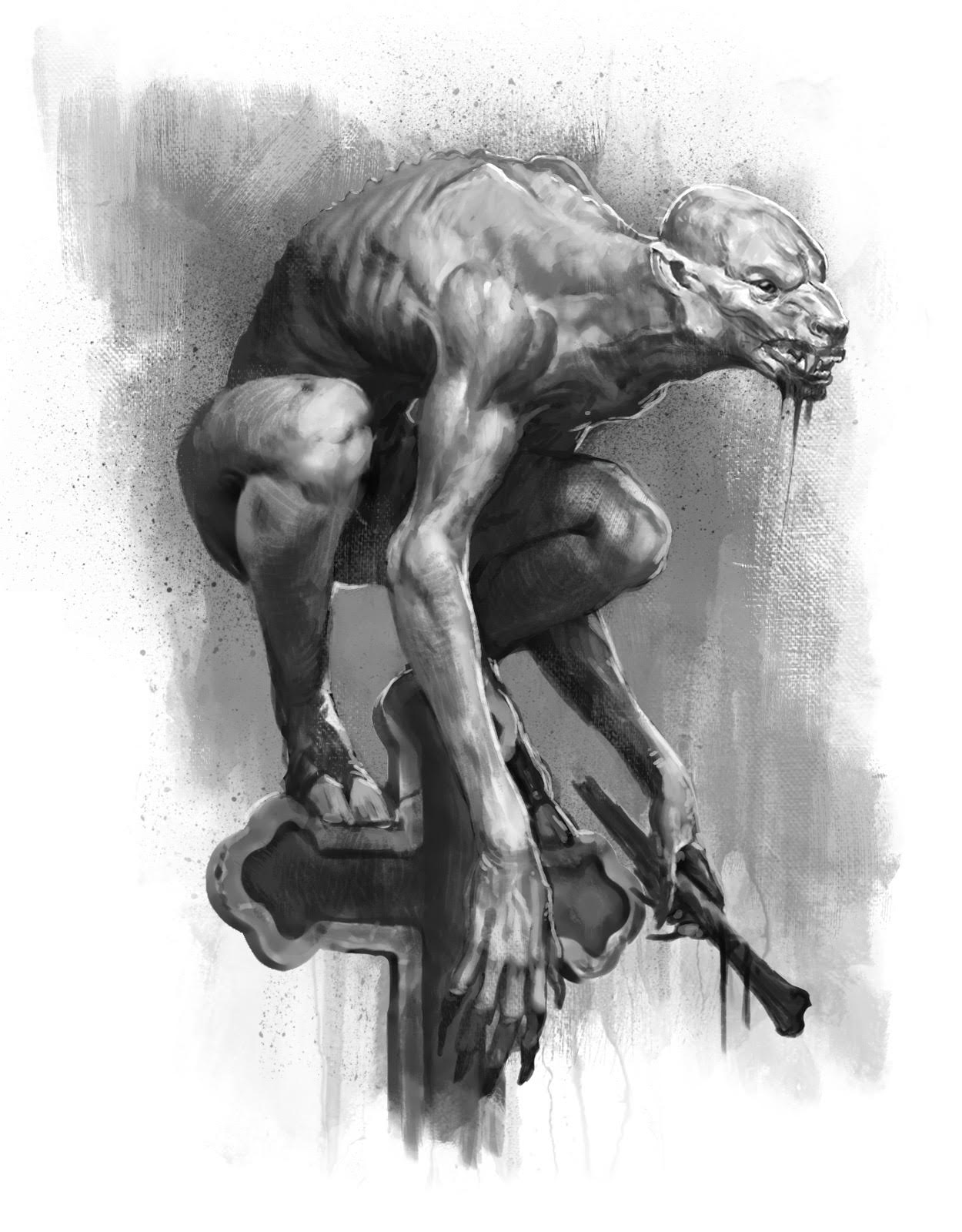 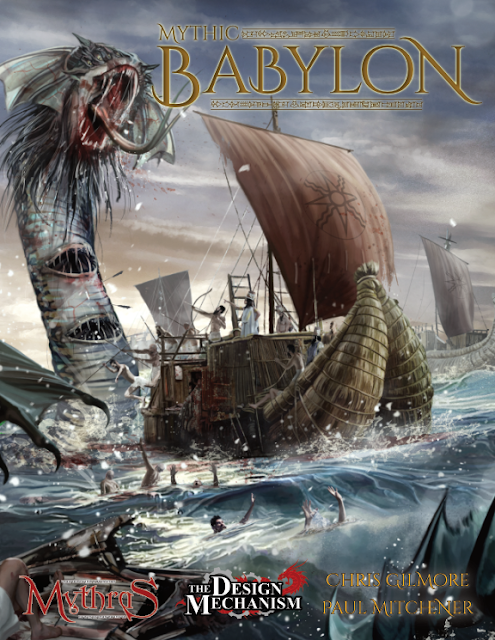